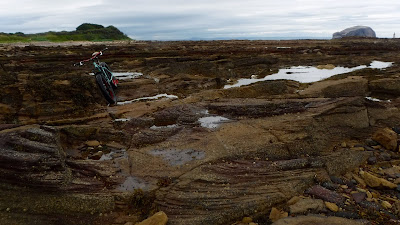 I spun down to Seacliff Sunday morning to try the Surly Wednesday with Bluto suspension fork on the rocks at low tide and riding down thought how it`s nearly 10 years i have been riding Fatbikes and the thrill of riding down onto the coast is as much of a buzz now as it was then.. like it was when going to the coast with Dad as a kid in the big blue Landrover...

Today i was grinning like a dafty as i coasted down the track to the beach...
And into my head spun the first track i used for the first beach ride film i made on my Pugsley - `Safety Net` by The Shop Assistants, an Edinburgh band whose guitarist is Dave from Bothy Bikes in Avimore!, though i did not know that at the time! :)


Beachride; 9th July - descending to Seacliff from coastkid71 on Vimeo.


Not a huge brick but a trick of the lens... 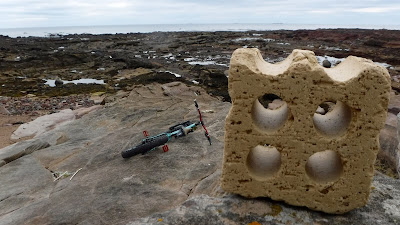 There is no end of lines across the rocks here at low tide. People will be asking `how does the Wednesday ride with the Bluto forks?` well its more comfortable and you can ride more without it stalling so it is better for rock crawling, how long it will survive the coast we will see...

It`s a hostile environment as can be seen with anything non native you see on the coast and until i can afford a Lauf fork it will have to do... 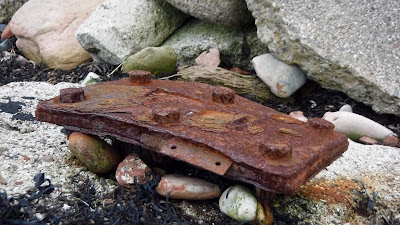 The Bluto fork gives as you would expect a more comfortable ride and when not compressed gives the bike a higher front end with a slighter slacker geometery which is ok,
Here is a film i made before riding for riding hence not many pics today...

I have the song on my pc and know it from the film `Lock Stock` but no idea of the title and artist...