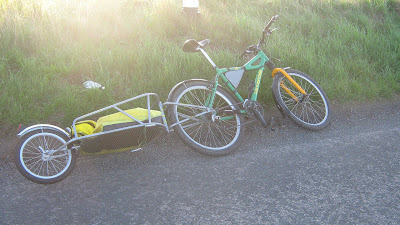 ive been cycling to work everyday for a few weeks now,you just feel better all day for cycling in,it can help tired legs recover from a big ride the day before too.
i have only used the car on friday nights to go to the supermarket 5 miles away as i was worried about not getting frozen food home in time,
i took the bob trailer on friday to pick up my motorbike jacket and trousers i bought on ebay and had deliverd to work,i the got the trailer complete with bag and new tyre for free-swapped for 1 of 2 spining bikes which were replaced in the gym at my work and were to be scrapped,
on friday i left 10mins early and thought id photo my commute being such a nice morning.
only 3 miles each way with one short steep hill,the prevailing wind is westerly so usually headwind going home,off we go;
leave the house; 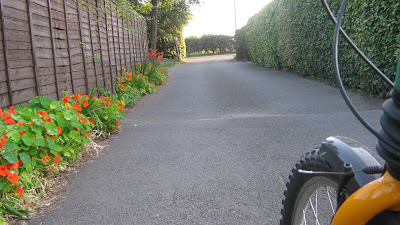 over the railway bridge of the eastern mainline railway and today into a low sun (6.30am) 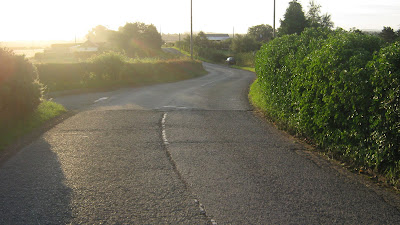 i can often here the intercity trains coming from miles away on a calm morning and although the railway is 40 yards from my house in a cutting you feel the house vibrate as freight trains pass!
after 2 small holdings we have fields either side and pass a small wood on the left where i often see deer who dont hear the bike till you pass real close 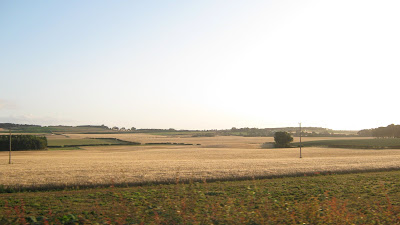 i only see 3 or 4 cars when on summer hours (7am start) two of which wave,we dont know each other! just passed each other for years,there cars change as do my bikes,they probably envy me working locally as there heading westerly presumably into edinburgh (shirt and ties) i put a smile on there faces in winter when still cycling in awful weather,there are a more cars in winter when i start at 8am as the edinburgh commuters are heading for a train station nearby or for the A1 road west into town
so on we go,at the road end swing left now riding north along a rolling up and down road with fields either side again 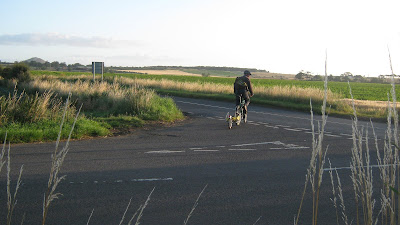 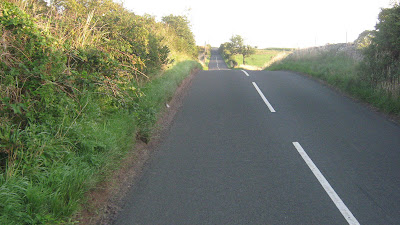 potatos on the 2nd eastern side field are nearly ready,dont think they will miss a few soon for a hungry cyclist!often as this morning the low sun looks amazing shining on the ripe wheat nearly ready for harvest 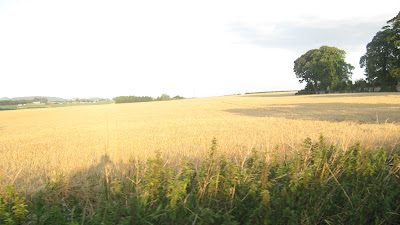 there is a road east here i can take to my workplace,a back road often untreated in winter i sometimes go but it makes the same climb in height over a half mile as the short steep climb ahead which i prefer as i just stand up in a harder gear for about 20 pedal spins and though it catches your breath slightly i dont heat up like i do on the other longer climb so arrive at work not sweating,esp when wearing waterproofs
so up the short steep hill which narrows to less than two way traffic width through a cutting,
at the top we turn right,note the view behind over the flat plain with traprain law behind and the lammermuir hills on the skyline 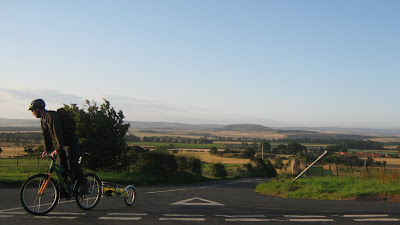 my house is southwest from here,beyond the wheat field in about the middle of the picture 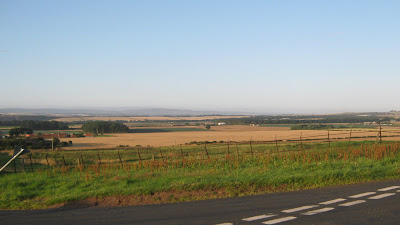 we ride about half a mile east-today into the low morning sun,theres a lovely view south over farmland again 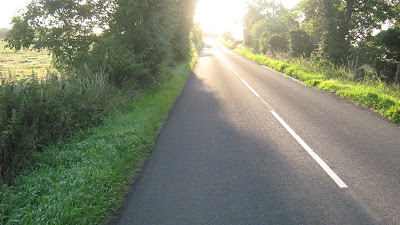 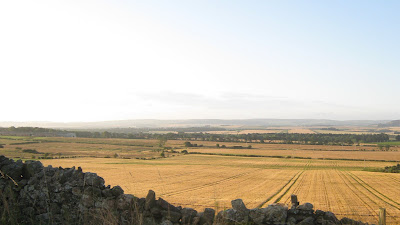 theres a couple of trails that cross the road that are part of the john muir trail,i can ride to work mostly off road but not really as the crow flys-so to speak, 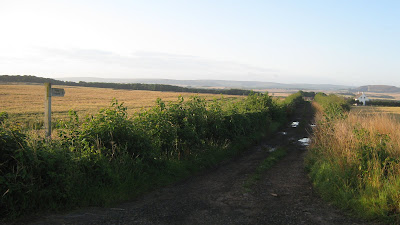 turn right at the next junction,note the old cast road sign,a common feature in east lothian,they are old but must be post WW2 as all road signs were removed during the war incase there had been a german invasion to slow down there advancement and orginisation! 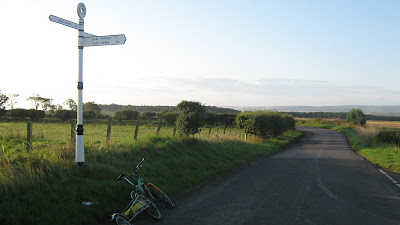 this dead tree was growing when i started working and using this road daily here 12 years ago,theres tree stumps all along the road and must have looked quite diffrent tree lined,especially in summer, 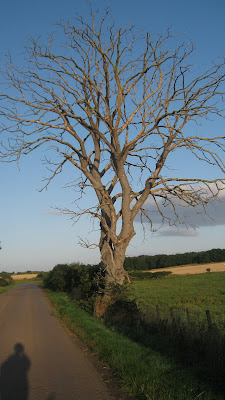 around another right then left then its a quarter mile slight downhill to turn up to work and also where i first see the sea,the low sun in the pic blocks the seaview 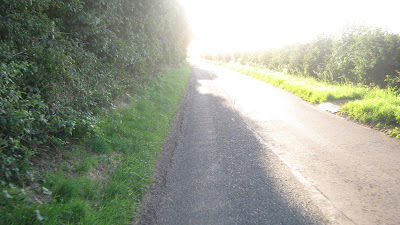 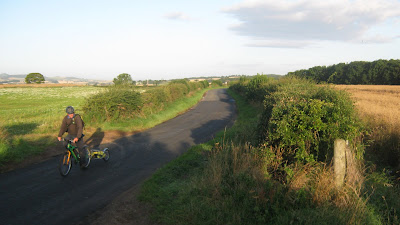 before turning up to the sheds at work,note the right of way sign which is the old coachroad to north berwick,once a main thoroughfare and halfway along its 1 mile lenght was a coach inn which has now completely vanished on the ground where old maps showed where it was,proberly the stone was used to build elsewhere, 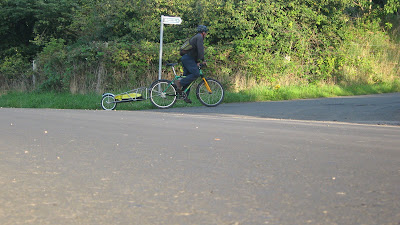 up a short climb and im at the sheds,nice when one of the guys is in before and opened up too!,now time for a quick brew before starting 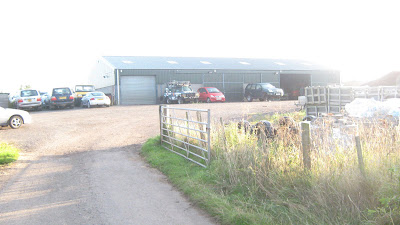 and what an amazing day,heres some pics of views from work; 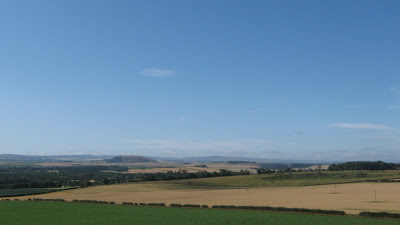 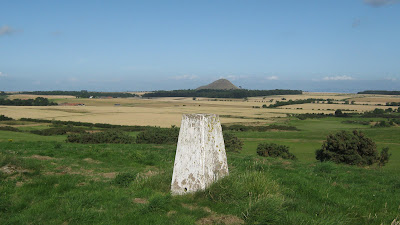 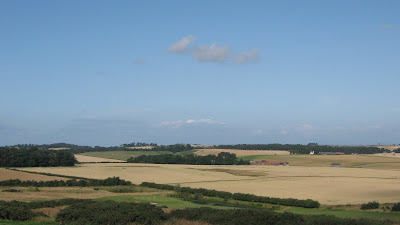 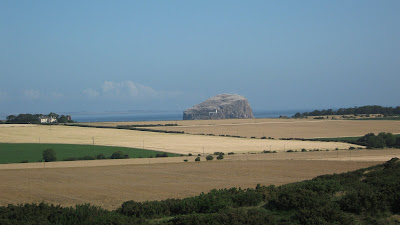 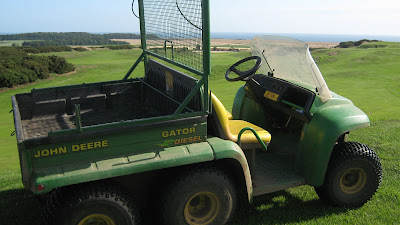 the mother of all flymo`s!! 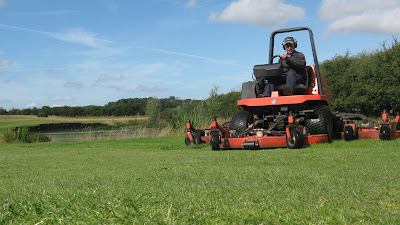