My Surly Wednesday... A long overdue review of this underrated (and often overlooked by myself with all the Pugsley attention) Fatbike... 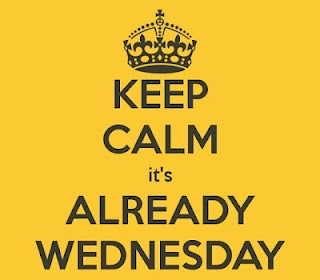 My Surly Wednesday is approx 6 years old now and it seems a long time ago I built the frame set up for beachriding to originally replace my ageing Surly Moonlander... 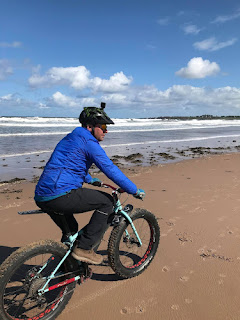 Its a fun bike with lively handling with more modern Mountainbike geometry,
Yet my Surly Wednesday is the least mentioned Surly I still ride on the blog, probably because of the last Surly Pugsley 2.0 bikes receiving all the attention with their wheel size capabilities. The funny thing is my Surly Wednesday has been bomb proof reliable since building with a few wheel swaps along the way, but it never seems to have any teething problems and just gets on with letting you enjoy the ride, as a good bike should!.
And Pugsleys big sister Wednesday (named after Addams Families kids get it?) does deserve more credit as it really is a great Fatbike design designed around the later to market 4.6: tyres (in-between 4 and 5 inch tyres),   the 4.6" tyres actually have near the same side wall hieght as the bigger 4.8" tyres, so as with those bikes running them when you fit 29+ wheels (29 x 3") you don't  jack the bottom bracket hieght up much (around 1 cm) unlike the original Pugsley Fatbke which is raised an inch.
Comparing the Wednesday to the Surly Pugsley 2.0 ;
I have been asked  online by a few folks to compare it to the Surly Pugsley 2.0 but I don't see the point in comparing it to a frame set/ complete build bike when the Pug is no longer available new,
It was indeed the Pugsley 2.0 which would replace my Moonlander as it can of course fit the huge Moonlander huge wheels as I have previously wrote about,
The only comparisons I would say between the two bike designs is that the Wednesday is more like the Krampus for out the saddle riding, and the Pugsley 2.0 with a higher head tube more comfortable for long distance/all day cycling...
Note on rear tyre width possible to fit on a Wednesday;
The big 4.8" tyres as fitted to the Moonlander, Ice Cream Truck, and can be fitted to the newer Surly Pugsley 2.0 will not ideally fit in the rear of a Surly Wednesday, trust me folk can say what they want but it will not fit and give you a full set of gears with sufficant chain to tyre clearance as i  tried it and even removing some cassette rings for increased tyre/chain clearance there is just not enough tyre clearance on the chain stays to run tyres down to 4-5psi which you want in soft sand,  So best stick with the recommended 4.6" rear.  I run a 4.6" rear and 4.8" front Schwalbe Jumbo Jims tyres on my Fat wheels and there is not much difference in tyre heights to notice. 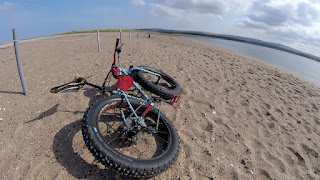 What Fatbike I would buy if I had to start again?;
This is a simple answer, say we had no bikes now and had to start again what bikes would we buy and ride?, it would be still be a a choice of available Surly. The Surly Ice Cream truck or the Surly Wednesday, complimented with a 29+ wheel set, and I think it would prob be the Surly Wednesday and I would have to be happy with the 4.6" tyres on 80mm rims, as not too keen on the super wide 198 rear end of the  ICT,
The complete builds on both bikes is a good priced package.
Right now (June 2022) a new Wednesday complete bike in the UK is £2000 (if in Stock) and a frame set is
£800.
ICT is £2600 complete bike and frame set is £900
Wednesday Frame highlights;
So here are the good things about the Wednesday frame design;
Straight steel tubes nothing fancy,
dropper post routing and tapered head tube allow suspension forks,
Threaded Bottom bracket
Rear brake mounted on top of rear drop out like older Pugs etc - less fiddly to adjust/remove wheel,
handy rear drop outs make rear wheel removal a doddle
bottle cage mounts on frame down tube and forks
The frame has real good handling for out the saddle riding with long top tube and mountainbike style low head tube, makes it ideal for adding 29+ wheels for MTB duties as well as bikepacking etc...
29+
And that is how I have settled on the set up for my Wednesday, as a 29+ bike filling the rolls of a Surly Krampus and Surly ECR which I owned at the same time, these frames were both sold once I was given this frame from Pat when he was marketing manager at ISON the UK importer Distributor for Surly here in the UK, I bike packed with the bike last year and its good for that, though its mountain bike geometry lends to a lower head tube than most touring/expedition type bikes and this was where my second Surly Pugsley 2.0 takes over that roll.,
Mountainbike set up;
So I returned the Wednesday to a 29+ hardtail mountain bike and refitted the Rock Shox Bluto 100mm suspension fork and Reverb dropper post and I'm real happy with the bike like this. 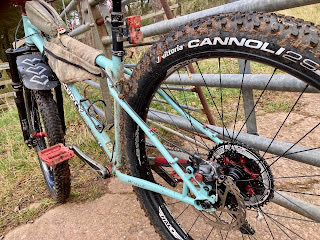 Climbing ability;
This is where I have found this bike really shines is its climbing ability, must be the lowish head tube and wide flat bars, long top tube - the only Medium size Surly I still ride (Pugsley 2.0`s are size large)this bike climbs like a scalded cat!, the best Fatbike I have had for climbing for sure,
Gearing;
which leads onto gearing, when I built the bike it was 10 speed and still is as our Pugsleys are, I started out with 1 x 10 along with a stealth 22 front chainring (Granny ring) 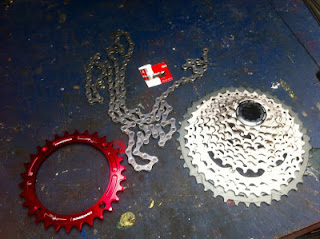 and used a 40t Sunrise cassette with a nice and short  Shimano ZEE rear mech which at the time seemed the best set up for a tucked in out of the way set up for rock crawling. 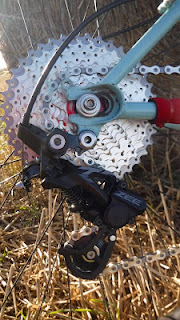 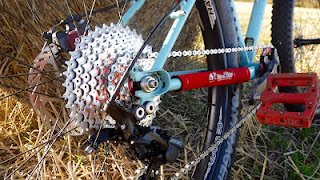 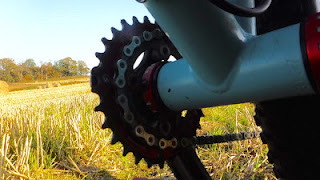 The world has gone 11 and now 12 speed group sets with huge 50 tooth rear cassettes but these never came online for the traditional Shimano rear free hub, Shimano went to a new micro spline  design and SRAM are not compatible, however we did get 42 and 46t cassettes from Sunrace and a few other makes that all seem to come from the same factory in the Far East, so I settled on a 46 rear using a regular length Shimano XT rear mech with one of those mech extenders...
Look what I found!;
Searching on eBay recently for another 46t Sunrace cassette to change my Surly Pugsley 2.p beach bike to from 40t to 46t rear mech (same as G`s bike) this company called BUCKLOS do a 50t Shimano fitment cassette. and it was £36 posted so worth a punt, and here it is... 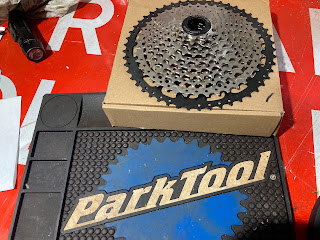 I bought a 10 speed chain down at Colins local shop and soon had the existing chain and cassette removed... 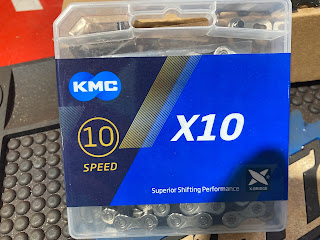 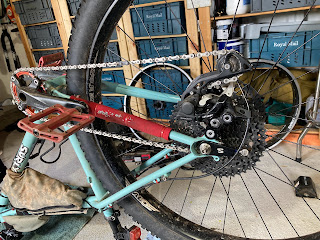 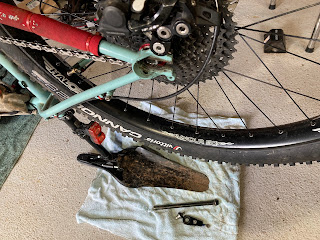 Neat rear drop out design on the Wednesday allow you to vertically pull out the wheel once you pull out the thru axle... 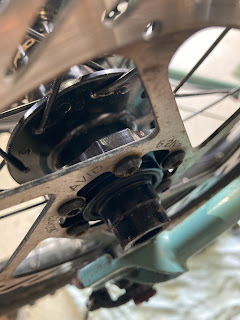 The new 50t is significantly larger then the 46t, only 4 teeth but quite a difference 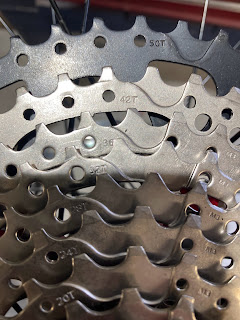 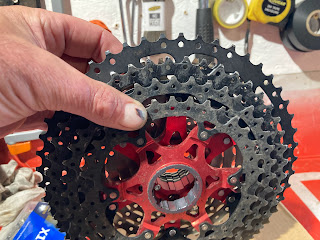 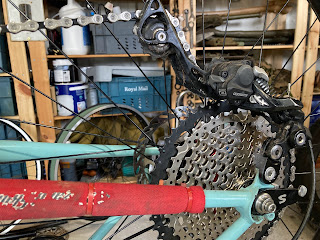 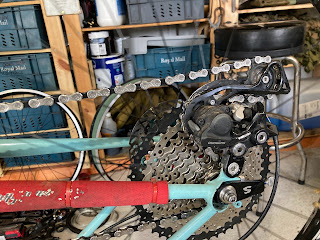 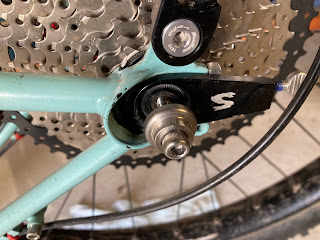 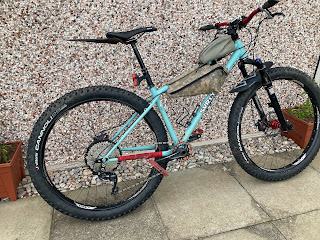 Check out this monster! 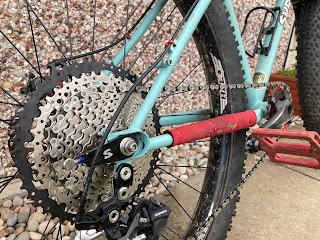 Need to get up the Lammermuir Hills to try it out but this will make it a lot easier to do - imagine using the 22t front stealth (granny ring) with the 50t?!! it will go up the side of near anything lol
In the meantime a short cycle around Gifford to check all ok and the gears sync fine... 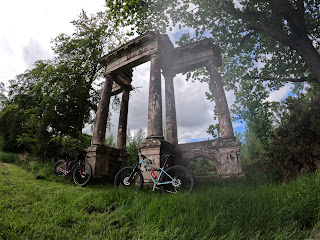 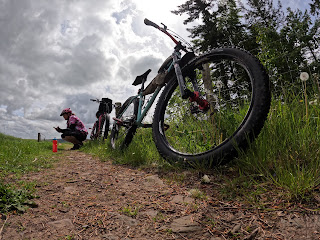