Well after posting some classical music posts, and a Spitfire film, if you combine the two you get quite an emotional film of those dark days of 1940 when life as we know it today hung by a thread.
Watched by thousands of people below in the counties of southern England.  The few - who were backed by a nation held out and in course helped change the eventual outcome of WW2 in Europe... 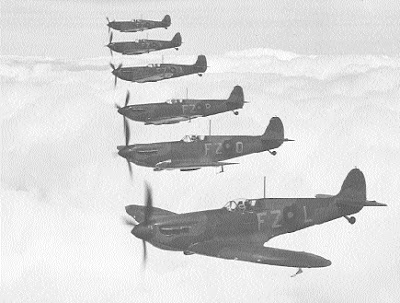 Having a big interest in the Battle of Britain i have read a lot of books written by some of those who flew, fought, and survived the summer of 1940 and the rest of WW2. I have watched countless documentaries and one thing that made what happened work in favour for Britain was not just the fact that Hitler and Goering made  fatal errors in ignoring the Chain Home Radar Stations that they thought insuperior to their own radar, and switching from bombing the RAF airfields to the cites and towns, was the age of pilots that the RAF recruited.

The RAF realised early on that because of what was expected of the pilots due to the statistics against them surviving (6-1) that the pilots had to be so young that they had no concept of their mortality.
So ideally then the ideal pilot was a teenager.
Look at 18 ,19 year old kids today - you may work with some or have kids that age and imagine them doing then what those few back then did...
It makes it all more of a realisation.
WW2 pictures of RAF pilots paints a picture of pilots that look older due to the brylcreem hair, moustaches,   and even the clothes of the time, sitting in deck chairs smoking pipes, playing chess etc,
but they were still kids...

Ferdinand Group, RAF Drem, East Lothian, all four in this picture never saw the end of the summer of 1940... 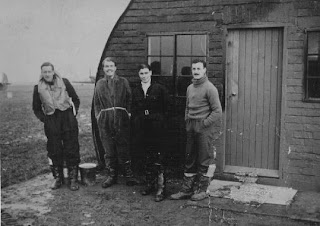 A famous poem by one of those young pilots, Canadian  `John Magee`

High Flight
Oh! I have slipped the surly bonds of earth,
And danced the skies on laughter silvered wings,
Sunward I`ve climbed, and joined the tumbling mirth
of sun-split clouds, and done a hundred things
you have not dreamed of, wheeled and soared and swung
high in the sunlight silence.
Hov`ring there i`ve chased the shouting wind along,
and flung my eager craft through footless halls of air...
Up, up the long, delirious, burning blue
Iv`e topped the wind swept heights with easy grace
Where never lark or even eagle flew
And, while with silent lifting mind i`ve trod
the high untrespassed sanctity of space,
Put out my hand and touched the face of God.


Glen Miller  may have been a favourite of the then `swing scene` in the dance halls but classical music was listened to then on both sides, and certainly Beethovens `Symphony No3 E - Flat Major "Eroica" III ` which was written in 1803 is as popular today as then in 1940...

A moving film on Youtube i found a while ago, featuring genuine Battle of Britain footage of squadrons being scrambled and engaging bomber formations and fighters, not Hollywood but the real deal.
Edited to a fitting tune and one of my favourite Beethoven tunes;
Symphony No3 E - Flat Major "Eroica" III

Erocia is Italian for Heroic... quite fitting...