I drove down to Glentress today in the Tweed Vally and took the Surly KramPug 29+ to see what it rode like in a trail centre.
Glentress and Innerleithen are classed as one centre in the Scottish 7 Stanes Trail Centres , They are probably the largest trail centre in the south of Scotland. 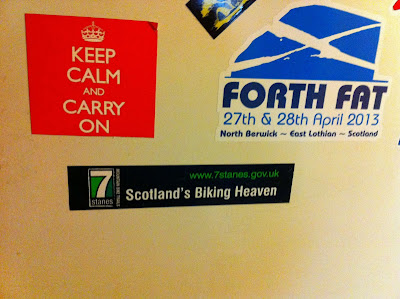 I have put my time in here at the Tweed Vally in the past,  driving down there 2 or 3 times a week, Saturdays, Sundays, and a mid week ride (night ride in winter).
It is where i got my MTB skills with the wheels off the ground, and i have met many friends riding here over the years.
For myself trail centres are all about social riding, while often my coastal and local trails cycling is a personal thing at the places i explored when i grew up, and the local history, wildlife and scenery.
Click on the Glentress label at the side of the blog for more stuff on Trail Centre riding...
The Tweed Vally Centres was a regular haunt  for 6 or 7 years until i was lured, then turned to `The Fat Side`... -:)

Some of the guys i used to ride with regularly back in the day... 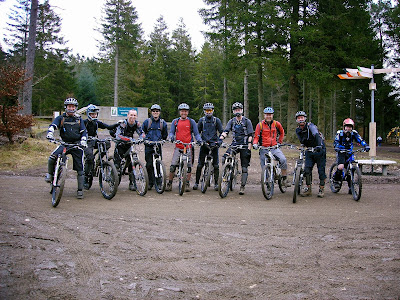 We rode the xc trail and did down hill  uplift days on the bigger travel bikes along the road at Innerliethen, and the Blue, Red, and black trails and the jump park here at Glentress... 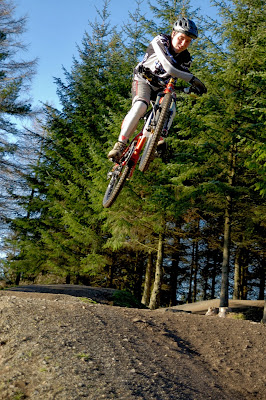 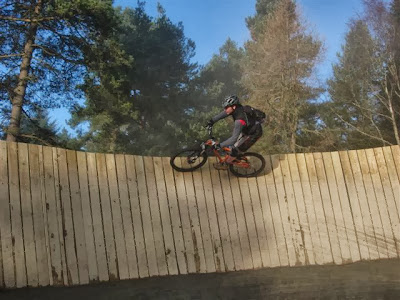 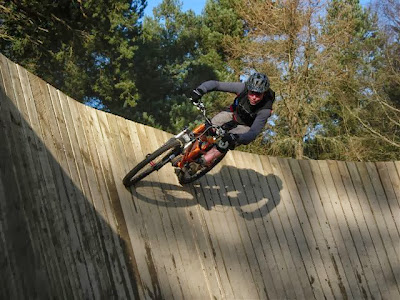 Good times, but i have paid my dues too in falls...
Some people laugh at riders wearing knee and elbow armour. You have one set of knees so look after them.
Ever had your elbows scrubbed to remove gravel? , then the frayed skin snipped, and then stitched at Borders General Hospital?, not a pleasant experience. Or having a split knee stapled together?,eye watering and not nice i can tell you!.
Worst was a big crash when it all went really wrong riding downhill at the then newly opened Red Bull track at Innerliethen, resulting in a fractured skull and an ambulance trip to Borders General, then Livingstone for 2 weeks. I wouldn't recommend trying that one... -:)
My face still bares the scar today on the left cheek. That was a bad one, and i found it hard to get over and was uncomfortable when in public at shops etc and to socialise, as living with a scar on your face i found people look at you differently sometimes. I try to hide it behind a big grin -:),
A few injury's then,  but i`m still trucking!.

I did not arrange to or expect to meet anyone today, yet these four friends in this pic from 2005 i met up with through the day, Mark and Damian (centre) then after i changed a slow rear flat (tiny bit of grit inside the tyre), i bumped into Davie and Brian (on the right). 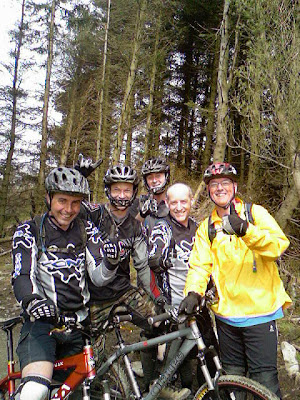 These four i have done the most riding here with,
Mark and Damian are still really super quick and smooth, both also have downhill riding experience which shows in their skills.
Then older than them are Davie and Brian, always full of Scottish banter hence their nick name - The `Still Game` boys!, they are still quick and smooth and could put to shame many riders half there age...

I have not ridden here for about 2 years, and the 50 minute drive down brought back a lot of memories. The old Hub Cafe - it was a bit tatty and not enough seats inside on wet days but it had character and really good food, esp the cake!. Emma and Tracey ran a great show and the events and night rides were memorable times, as were the friendly staff in the cafe and the bike shop...

A pic of the old Hub in the Forest shop around 2007, and my old retro new build Cannondale Uber V)... 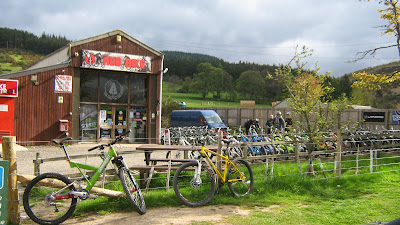 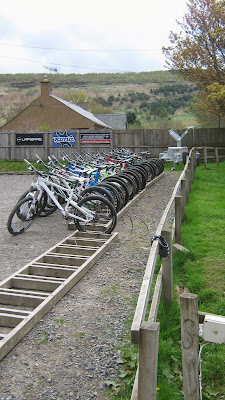 It is of course where my Grey Pugsley rolled out nearly 6 years ago.
I only rode the bike a couple of times around here, as far to much uncontrollable rebound at warp speeds.
It was not what i bought it for, and also i had a lovely Santa Cruz full suspension bike for playing here on.
Today the old grey frame returned to Glentress, in a new set of clothes... -:)

Things changed a few years back at Glentress. The trails are all still there, The Hub shop closed, and the cafe too, which is now gone as the new Centre was constructed, It provides everything a visitor needs, but seems to lack character and now has a commercial feel to it as you walk around the new centre.
End of an era... only memories remain.

Now it is an Alpine bikes shop and a cafe that i visited today for the first time next door. We had a bite to eat after riding, Food was nice but not the same size portion of Macaroni we used to get... 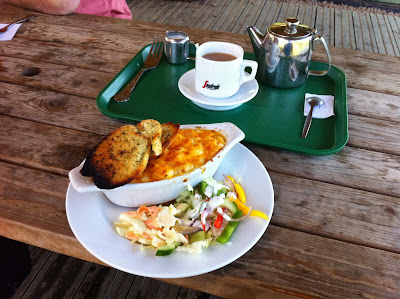 Typical that i forgot to pack my camera at the car park and left it in the car - doh!, so no pics up on the hill,
I really was not that organised, like i am for a coast ride. I packed the wrong helmet for using the Go Pro -at least i managed to remember that!, so my helmet moved on the rougher sections, so after a couple of runs i gave up trying to film.

The KramPug was surprisingly good considering i was riding a rigid bike, no way would i ride my Karate Monkey at the speed i did today. The 29+ larger wheel diameter does give the Pugsley an inch higher bottom bracket height and it was noticeable in the turns. This though is an advantage riding local trails but not so here for berms etc.
To sum it up it the KramPug  set up is not a full blood Krampus which would be better here at a trail centre with its geometry, and the Pugsley frame set/offset Krampus wheels - which i call a KramPug is deft a nice xc bike with a roomy cockpit, springy frame and that higher BB height comes into use on single track trails through longer vegetation. It gets more life out a 4" tyre bike with the 29+ wheel set.

I was riding with fast riders today. And was on the edge a few times on rough corners when the front end started to bump and rebound/drift out. Sometimes a bit nervous as you speed past trees.
This is the thing that 4" fatbikes do even worse on trails like this at speed. No geometry will stop the uncontrollable rebound of 4" fat from doing this. Slow it down a bit from warp speeds and your fine and stay in control. Your making the most of a bike never designed for trail centres so enjoy it -:)

Here is a film descending `Spooky Wood` on the Red route,  following Davie on his Scott Ransom, a 6" travel bike with dropper post which allows him to adjust his seat height on the move, handy to keep getting in some peddle strokes between berms.
Then some film riding `Berm Baby Berm` on the Blue route behind Brian on his Orange 5, again with a dropper seat post.
Notice how smoother the blue route is and the inertia of the 29+ wheels which makes the bike roll and roll and when we were both free wheeling and i kept having to brake...

Thing is this a is a fully rigid bike riding there, which at that speed is impressive


I still think any bike needs a fork to ride descents at the speed i rode today, but i have no bikes with suspension anymore.
So what do i build to pop down again to Glentress once a month or so to ride with friends?,

Comes down to whether you want to ride a hard tail or full suss, hard tails are ok for occasional visits and a bit slower speeds - and so some self preservation!,
I could just buy a 29er fork for my Karate Monkey, a rear hub and return it to 2x9 or 2x10.

The drag of 4" fatbike tyres is their Achilles heel on long climbs, and i do not want that for trail centre riding.
But happy to come down here and ride around on my Purple Pugsley with other fatbikes sometime for a giggle, just not trying to ride at the warp speeds i used to ride down here, self preservation and ride another day is how i want to keep riding.

I could sign my life away on a full suss rig again, but i really cant justify it as i would not ride it around my home trails.
I could go the hard tail route as can live with that if my Karate Monkey which has a springy comfy frame. Mmm yeah, add a fork, maybe later 29x50mm Rabbit Hole rims too to increase float and comfort...
I thought i did not really need the KM anymore after building the KramPug, i do but in another roll -:)

Decisions... There is of course a Forked 26" hard tail MTB coming out in 2014 that would be a total blast to ride here at UK Trail centres, Surly`s soon to be released new Instigator which runs a fatter than normal MTB 26" tyre on wide light rims.
This would be ok for local stuff too...

It was at the Interbike Show over in the US  a few weeks ago.  Here is Sov from Surly explaining the bike... -:)

In the meantime i will keep on trucking and tweaking the fleet...
Posted by coastkid at 05:32