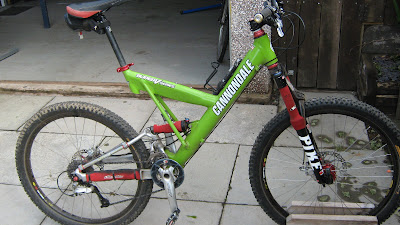 i took my uber v out for a couple of hours ride today,i made a youtube film as i haven't seen any ubers on there,you may be wondering what an uber v is?
an uber v is a cannondale super v with a raven or jekyll swingarm which allows a longer travel shock to be fitted (190mm instead of 165mm) giving around 6"/150mm travel,these are your original all mountain bikes,built up around 2002 onwards when someone discovered the swingarm/shock swap out,at the time downhill bikes like cannondales own DH v were 6" travel,i still have a pair of 2002 junior T 6" forks which were fitted to alot of them but i do prefer the pikes,the bike has a 05 build mainly hope and XT though the cranks and wheels were fitted a couple of years ago,with a 140 lefty fork fitted this would be a light build,as it is around 25-26 lbs 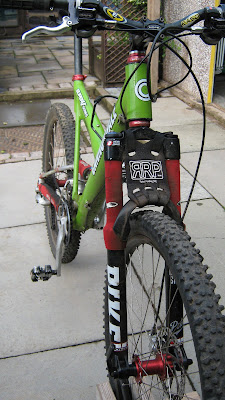 i haven't ridden it for ages and often think about selling it to put the money into parts and goodies for my newer bikes then after a ride on it again i think `no cant sell it!! 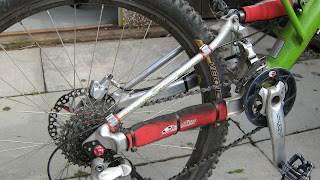 don't think its the best bike out there but it is nice to ride and climbs and descends well,my heckler descends better but doesn't climb nearly as well,it has a high BB which i like for xc riding where your on narrow singletrack through heather,the coil pikes suit it well and admit ably havent been serviced yet since new in 2005! ,a testament to there reliability 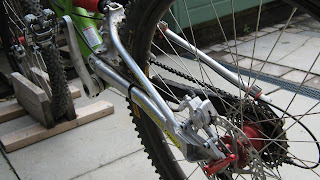 the Fox RP3 rear shock works well with bob free climbing and all the parts work well for what i use it for which now is just xc riding and winter night riding,hence the neoporene gators,i like the old school colour of kawa green with the red,it still has the original 1999 STX front mech and theres still no play in it,
so a 6" rear travel xc bike with wind down forks to enable steep climbs then fly down quite narly descents,these were being ridden all over the place before the scott ransom came out and `supposidly` rewrote biking with the `1st all mountain bike`!! 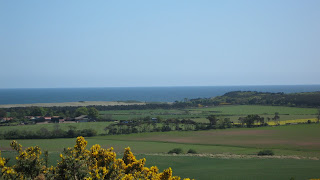 i took these pics at work yesterday,we've had 2 weeks of this high pressure weather with an onshore easterly,only mid may and light till 10pm on a clear night.it will be an hour later than this up on the north west coast and even later on the western isles where I'm heading in 2 weeks.hopefully my frame bag for my pugsley will arrive from alaska next week as promised by eric of epic designs,apart from that I'm ready to go,just need a night packing the bike. 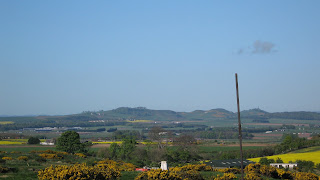 its going to be a long summer with the amount of biking Ive done already,lots of places to go locally on weekday evenings,lots of ideas for films,going to do a series of films biking the east lothian coastline here and putting together a film on riding tunnels on the pugsley,done some already in edinburgh but going to recce a storm drain which will be cool if not to greasy and slippy-and it exits onto a beech!, 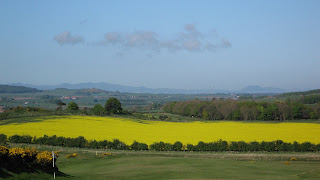 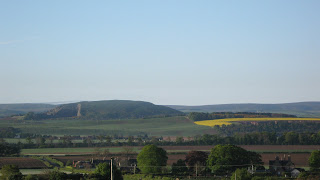 Posted by coastkid at 21:59 No comments: 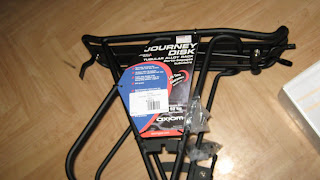 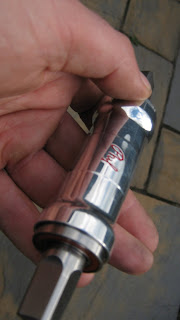 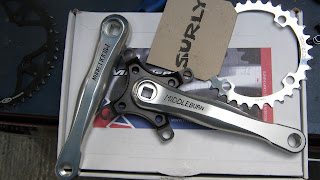 well there here at last the parts ive been waiting for the pugsley,most important and much needed the new bottom bracket and i must say what a lovely looking bit of engineering to go hiding inside the frame(esp at how much it was) but hopefully it will give miles/years of service,i fitted it tonight along with the middle burn crank arms,im fitting shorter 170mm arms than the 175mm that were fitted for that little bit extra clearance on rocks and should save the pedal pins on my flats from taking so much abuse,the threads of the philwood BB were a bit fiddly and hard to get started on the frame threads but i found it easier to start them by hand then use the fitting tool once they got to hard to turn by hand,i need to order a larger bashring to clear the crank spider,the 32 tooth bashring is hitting the arm prob because its the xc spider for triple chainrings so will get a 36-38 bashring which should work ok,
also to arrive this week was the alfine 8speed gear hub and shifter 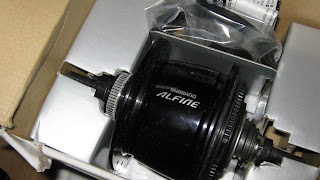 though as i was told by my LBS who will build the wheel no sprocket,axle nuts and the bit for the cable housing but will be ordered in to the shop for the end of june when i get back from my 2 week holiday,the shop is too busy to get the wheel built so im going on the derailier set up at present which to be fair makes sense as by the time im back it will need replaced as is half worn now,i expect to bike 4-500 miles and prob about a third of that will be on sand,beaches,
also to arrive was the rear rack,not much options on known racks that fit pugsleys in the uk(not many pugsleys!) but the old man mountain rack which fits is unavailable,prob have to order the surly rack and wouldnt be that cheap i imagine though proberly very good,i took a chance and ordered an alloy rack from chain reaction in irland that was a reasonable priced £23 and claimed to be able to fit any bike and it even fitted the pug after i trimmed th front mount bars and then added spacers to centre it with the offset frame, 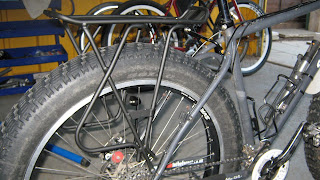 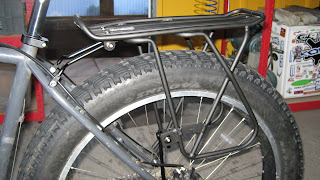 so just waiting for my framebag from epic designs, promised by mid may which i hope to try out every thing on a local weekend trip camping before my hols in june,
Posted by coastkid at 18:58 3 comments: