its september next week already,theres still alot of harvesting going on around the county between the heavy showers (and gale winds!)of the last 2 weeks, 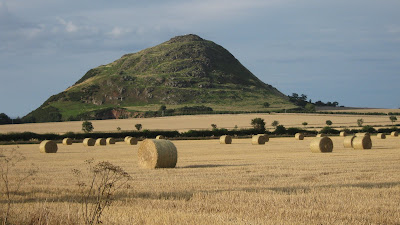 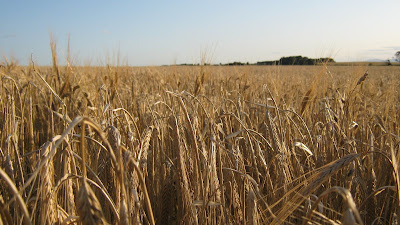 theres a nip in the air in the mornings now,nights are drawing in (dark at 9-9.30pm) giving a autumn feel,but lets hope september gives its best with long shadowy late afternoons,its my favourite month in east lothian for cycling here as vegitation is dying back and those fields of round straw bales look great-lots of pics coming! 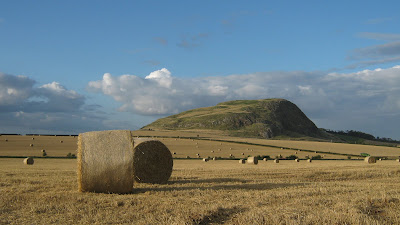 east lothian is a fairly flat rich agricultural plain,hemmed into its coastline of the firth of forth estuary and north sea by the lammermuir hills,theres a ridge that cuts west to east-the garlton hills and the river tynes flows between the two hill ranges,the other 2 distinct landmarks are the two laws,
i wanted to show the county in harvest gold so where better than from the 2 prominent hills in the county which you will have seen in the background of alot of my pictures,north berwick law and traprain law,i have already made a slideshow film in spring of the garlton hills and its historic ridgeroad...

so i made a film around them,heres some info on NB law 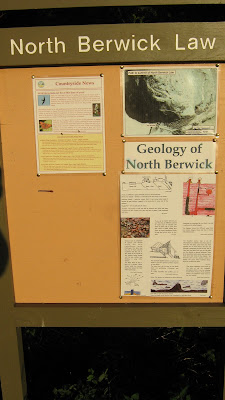 it was a perfect evening to walk up and film...

on monday night as it was such a calm evening with few people about,
on tuesday morning i filmed these american F15s at work dogfighting,the noise was unreal aswell as the speed and height of course they look faraway on camera.
tuesday evening was sunny too but a weather front was coming in with a wet forcast, 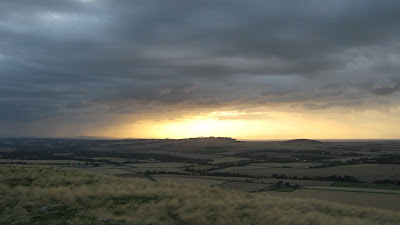 it was blowing a gale but dry so managed to get some combine footage! 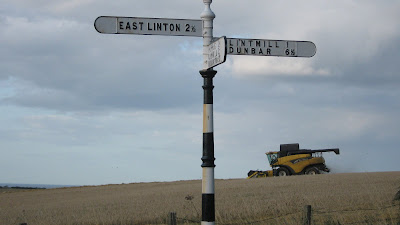 before going up the humpbacked traprain law... 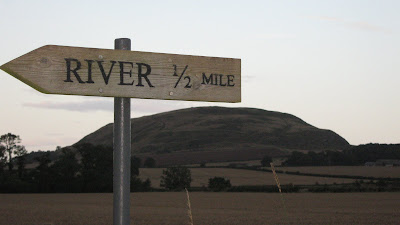 i also managed to catch the resident perigrines on film,proberly explains why birdlife is a bit low key around the law,there the fastest bird of prey and you always know if ones about because every bird is up flying in panic,2 great evenings spent soaking up the views 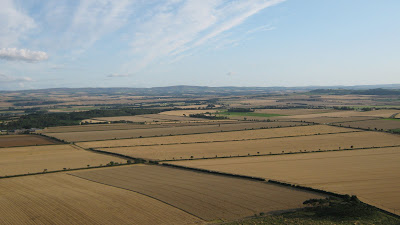 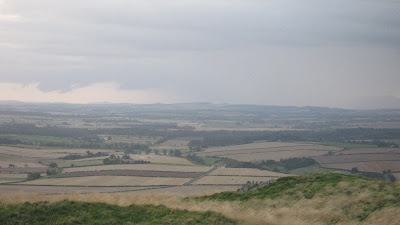 Posted by coastkid at 07:20 No comments:

its a dogs life

this is sam, a year old hungarian vizsla i was dogsitting at the weekend for my friend... 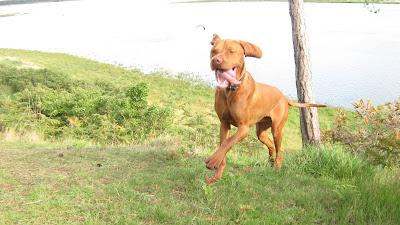 he is full of beans being a year old and being already used to running alongside a bike i looked forward to a weekend on the beaches giving him a good workout!,i never knew it was the highest/lowest tides of the year until i heard the shipping forcast friday,a quick check read low tide mid morning satuardy-perfect,before to many visitors arrive on the beaches,
i took him down my local closest beach friday evening and he was loving it.. 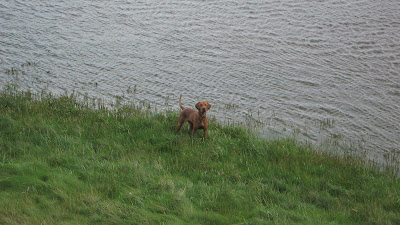 it was hightide but could still get along the beach between the dunes and sea ok
i filmed more than took pics and made a film...

satuarday i was up at 5am for work and forgot my camera and missed getting on film a clear sky sunrise out to sea,sam ran about while i mowed greens and once home after some breakfast,i put the pugsley on the car and drove down to north berwick,parked and cycled along the john muir trail into yellow craig...


across the field the trail is a bit sandy then onto grassy paths..

into the woods and past the amazing old twisted and salt air weather beaten scots pines,they are fenced off now to help protect them,we climbed them as kids..

onto the links,created by sand blown over the bedrock and covered with fine fescue and bents grasses,kept short by rabbits,this is what alot of our natural coastline would have looked like before the creation of the links golf courses which used the natural topography and just had added the tee`s and greens,there is an amazing flora on areas like this,lots of micro plant species amongst the grasses...

over the dunes and onto the beach..

to ride west into what was a quickly strenghting westerly wind..

sam was loving it and happy trotting alongside me as we rode into the wind passing fidra island and its lighthouse,there is a narrow gauge railway from the lighthouse built in 1885 down to the landing pier,the lighthouse is of course unmanned now since 1970 as they all are but it must have been strange being a keeper on fidra so close to shore and seeing people on the beach 1/4 mile away,remmember the beaches would have been busier in victorian times than they are now,im sure im not the first to cycle these beaches,knowing victorian exploration and love of bicycles but they would have been off pushing alot!

the lighthouse was inspiration for robert lewis stevensons noval`treasure island`and the yellowcraig hill was reputed to be `spyglass hill` RLS visited nearby north berwick and walked here often,

riding on west along the coast the wind was getting really strong,i have never seen the tide so low here before and was riding on sand around rocky headlands i usually ride over..


riding up over a headland which was still into the sea a sandy narrow trail between seabuckthorn bush`s...

it passes an old WW2 lookout post,slowly getting swallowed up by the encroaching seabuckthorn,these artifacts should be preserved and kept from being lost from site and enevitably broken up by the undergrowth..

down back on the beach and its a slimey slippy rocky trials fest to get back onto the sand again,it took a while to learn riding over all this but it can be done..

past a massive beam stranded on the rocks,about a foot square and around 18foot long,this must be from a pier somewhere,i know its about a months firewood for me if i could get down here with a car!

the tide was so low i could ride out onto longskelly rocks,mostly an island..

amongst the rocks of the island above the tideline is built lots of small shelters with driftwood and rubbish and flat stones,i think these must be for nesting seabirds,need to find out about what birds would use them..


looking west from the island we ride back to the coastline..


theres always something new to find on the tideline,a life ring washed up;


backdown on the low tideline is was diffrent views of the coast being so far out,headwind was near gale force as we rounded a point into freshwaterhaven


after a hard cycle into the wind across the bay i decided to cut up through pinewoods and shelterd paths to get out the wind,i would ride back on the shoreline with the tailwind,cracking view of freshwaterhaven beach...

and passed the old ruins marked on the map as St patricks chapel but i think proberly an old herds cottage by the looks of it (fireplace,door frame)

along sandy trails through pine woods,half of which have unfortuantly been felled...

through the woods and along a sandy trail through seabuckthorn,some good downhills only enjoyable if you own a fatbike though!

over the fence on my left is muirfield golf course,where the open is held,im having more fun though than playing golf for sure!,when i get my helmet cameras i won i will make a film riding this trail on the pugsley,it flies on this soft well walked sand..


onto a firm track and we ride up above the car park and beach of gullane..

soaking up the view..

the trail heads downhill amongs rounded rocks above gullane cliffs,knowen as `maggies loup`loup is scottish for leap or in this case jump-maggies was a local woman who took her life on the cliff way back years ago,the story may be a fabel its that old,you will recognise this if you seen the film i did here a couple of months ago...

further round some of the WW2 anti tank blocks are dissapearing into the buckthorn,we used to run along the top of these when we were kids

but this is real wierd..,this area was the football pitch for the home gaurd during the war,the goalpost stumps can be seen in winter..

who manned the coastal defences here and either it was sprayed with some strong chemical or tramped solid from 5 years football but the buckthoern has never encroched the pitch,hows that?,a sand quarry nearby has dissapeared that i dug sand out of as an apprentice greenkeeper 20 years ago and as mentioned the anti tank blocks are slowly being coverd by this furiously fast growing plant,i think its some dodgy army chemical!!
time to get back down to the beach..

along a grassy old track..

which leads through the nature reserve onto the beach through a grassy lagoon that used to be the tideline,see all the driftwood left..

nearing the old sub wrecks i see the funniest thing,a police no parking cone just sitting there-3-4 miles from a road

we ride out near to the estuary mouth but the sand is quite rippeld,sometimes its real smooth,depends on tidal currants..


heading back with a galeforce tailwind we were flying along but the rippled sand made filming quite hard,i mostly filmed going back across aberlady bay to make another film...

i will make another film sometime going the other way along the tideline showing the amount of drifrwood,sam certainly enjoyed himself..

he was knackerd after 5 miles each way and was out for the count satuarday night!.. 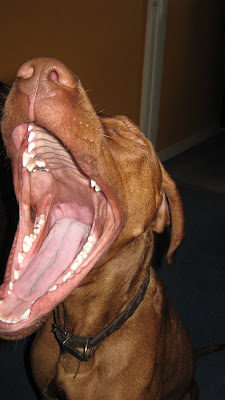 Posted by coastkid at 19:34 No comments: