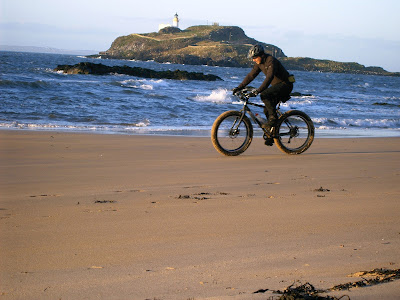 Post 481 rolled out last weekend as the blog started its 4th year...
When i started the blog it was to write about having fun riding my then 6 month old Surly Puglsey on the coast here in East Lothian and then later further afield  from Northumberland to the Western Isles.
It was started after reading loads of other great blogs of Surly pugsley owners, from Surly Bikes own blog and owners snow race reports to Doug's excellent blog on  commuting in 40 below on a pugsley .

These blogs are just two of a hand full of fat bike blogs i read before getting my own pugsley and which inspired me to try to write something myself. both of these blogs are still going from strenght to strenght.
Sadly most of those brilliant old blogs i used to read have all but disappeared now, the owners moved on to other things, do not have the time due to new family commitments etc, or just lost interest...

At the time there was not anyone else who was blogging regularly about  beach riding so i thought it may be of interest to a few folk.
Only a few months back i discovered there were stats of your blog you could view!, up until then i just looked at the viewing counter i had added.
It has become quite useful to see what people look at and find of interest,  what posts get viewed daily and how many viewings, as well as what country the readers are from.

coastrider blog has not had less than 372 daily viewings in the last 2 months, average is 445 views per day, the most was 1265!, who ever you all are only a very few of you pop by and say hello or pass comment but thanks for looking -:)...

And this is why i have done two new things, i closed the other non cycling related blog i started last year and combined them transferring those posts over and now also post stuff under labels of `Music and Film` for favourite music and  film trailers and other nostalgic stuff from youtube. This is stuff i often post on facebook, but i will be using FB less for stuff like that now and putting everything i put online under one roof.
Facebook is great for keeping in touch with friends but all the other linking stuff and they do does my head in at times, as do adverts along with its constant changing layout.
I am doing this as it seems to be what people like to view judging by the stats and people i know and comment.  People have come up to me on the coast and said `hi, i like your blog, crazy bike!` so i always ask them what they like to read the most.
The stats show a lot of viewings for East Lothian related local history posts like the WW2 Submarine wrecks and URBEX posts, and lately a lot of interest on my Surly Moonlander and any reviews and changes done to the bike etc...
Posts that were previously on the other blog hardly got any views when there, and indeed many friends said they always forgot to go and look there. the posts just did not seem to come up in searches etc...

The thing is there is just so much to look at when you go on line now whatever your interests or hobbies, loads of forums, face book and twitter pages, youtube, vimeo, the list is endless.

Now my Grammar is awful. i really struggle with spelling and plurals.

If i was at school they would give my grammar skills a condition name etc... -:)
And the old Blogger page spell check would only do about 20 words, so was not much good,

Some people will not know what this is like to deal with,  well i do not know what it is like to not be able to do wheelies, manuals, track stands and bunny hops on a bicycle, basic off road cycling skills, to not master these  must be really frustrating for some people...but they still enjoy cycling. Despite the struggle i still enjoy blogging...


Blogger has improved and has a better spell check and improved picture upload speeds too.
Writing posts is a lot quicker now and you can draft them and when you want post them and they post as newest post now.
I spend a lot less time on cycling forums now, esp UK forums due to a lot of negativity about fat bikes, only this from other mountainbikers, i just do not understand some people. Yet a lot of the public we meet always show an interest in the bikes and what they are like to ride etc...

Well fat bikes are slowly coming of age here in the UK, On One bikes release a complete fat bike this year reputed to be only £999,  Hope componants have released (inline) fatbike hubs; 170mm rear 135 front, now who would have imagined that eh? -:)

Oh and if you go and buy this months Singletrack Magazine (March issue 72) there is an article on beach riding in the little county of East Lothian, you should recognise some of the views...
Brilliant writing by Steve Makin and amazing photos of our coast by Steve and Jenn,
Pity none of the East Lothian posse had there pictures up close in it but nevermind, you can view our ugly mugs and guts on here anytime -:)