Back During WW2 folk didn't have Televisions in there homes yet and so would go to cinema`s to watch news reels like this film. It was important to show the population we were winning the war for moral. This went on on all sides.
This is one of those news reel films...

On Dec 6th 1942 RAF Bomber Command flew Operation OYSTER,
It was a special raid carried out by bomber squadrons in No. 2 Group.
Targets were the Philips radio and valve (electron tube) factories in the town of Eindhoven in occupied Holland.
93 aircraft took part in the raid;
47 (PV-1) Venturas Mk. Is of RAF No. 21, RAAF No. 464 and RNZAF No. 487 Squadrons, 36 (A-20) Boston IIIs of Nos. 88, 107, and 226 Squadrons,
10 Mosquito Mk. IVs of No.105 and No.139 Squadrons;
83 aircraft dropped bombs and one Mosquito was a photographic aircraft.
Eindhoven is beyond the range of fighter escort so the raid was flown at low level and in clear weather conditions.

Bombing had to be very accurate to only cause damage to factories in the complex as the Factories were in the middle of the town.
Normally they were also full of Dutch workers under Nazi guard so the raid was carried out on a Sunday to try and reduce civilian casualties.
Unfortunately some bombs fell in nearby streets killing 148 Dutch people and 7 German soldiers.
Full production at the factory was not reached again until six months after the raid... 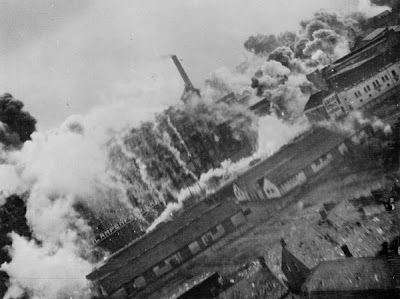 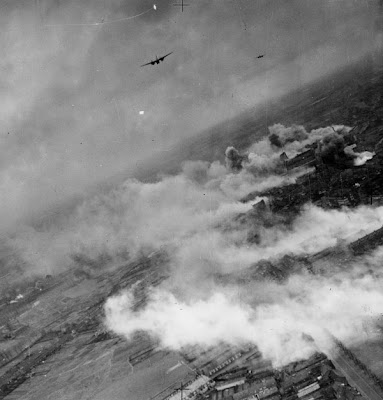 But the bomber casualties were heavy:
9 Venturas
4 Bostons and 1 Mosquito were lost over the Netherlands or the sea.
A 15 percent loss rate for the whole force.
The Venturas with the poorest performance suffered 19 per cent casualties.
3 more aircraft crashed or force-land in England and most of the other aircraft were damaged, 23 by bird strikes!

Lives were lost by the Allies and Dutch civilians.

When you watch this News reel Film look at the height the planes are flying at speeds over 300 mph, you see them pulling up to fly over trees once over Hollland!...

Yes there is the usual period `What What` English accents and the `daring do` music and all that.
But watch the young pilot when he is filmed flying at 3mins 20 secs...
Probably he is lucky to be in his mid 20s,  flying flat out at low level through enemy fire, responsible for his crew and part success of the operation so other aircrew don't have to return...
His life and his crews could be over in seconds by one mistake or one direct hit by Ack Ack or gunfire..
But he keeps his cool...but then he gives his age away at 3min 20 secs...did you see it?

he winks at the camera!

After marching right across Europe virtually unopposed i wonder what those German Gunners on the factory roof who must have felt like they were on holiday there in Holland thought, when they saw all those bombers coming in at roof height at full power without any fighter escort in broad daylight!