It was 5 years ago this month i picked up my Surly Pugsley from The Hub In The Forest at Glentress.

I have ridden bicycles since  i could walk.
I was a teenager through the BMX craze of the 1980`s and then have rode mountain bikes since 1987.
But i have never been so fascinated by a bicycle since i first clapped my eyes on a Surly Pugsley when it featured in UK Singletrack Magazine... 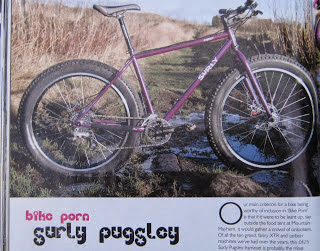 The Draw of the `Fatside`...
Something about the bike just made total sense for living here in East Lothian, the driest County in Scotland.
With our amazing coastline and sandy loam soil trails i just knew this bike would be fun.
A year of humming and hawing to sell my Downhill bike and trying to find out about availability of the needed parts kit here in the UK and how to build the 17mm offset wheels etc, along with friends comments of `What do you want one of them for?` and `It will be boring!`  then finally it all came together and between ordering tyres from the US and the rest becoming available it rolled out of the Hub mid October, just before Halloween having had the wheels built and the bike put together by friend Jake who wanted to add this then unusual bike to his CV. 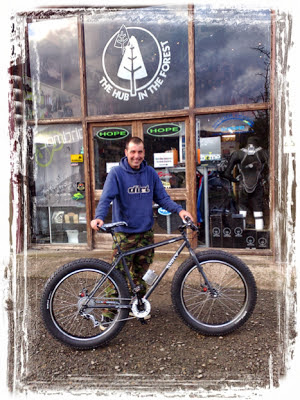 The bike arrived in the second shipment of Pugsley stuff to the UK,  the first few were purple and looked amazing in the pictures i saw, but i was a  bit sad mine was not the original purple but was grey.
I hankered over a purple frame as i rode this crazy beast everywhere including to work nearly everyday!.
I absolutely loved riding it - as i still do today!.
It was fun discovering where this bike could be ridden, places i never imagined possible on the coast, and learned how to ride greasy wet rocks exposed at low tides.
These bikes take a bit getting used to and learning how to put down the power smoothly and balance while steering on really soft and slimey terrain. I soon gave up riding clipped in for this type of riding and have ridden flat pedals on all my offroad bikes since.
A whole new area of riding had just opened up on my door step.

Within 2 years by a stroke of luck a brand new un built purple frame set popped up for sale in Ireland.
I was really made up when i got this... 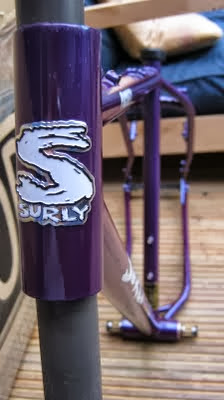 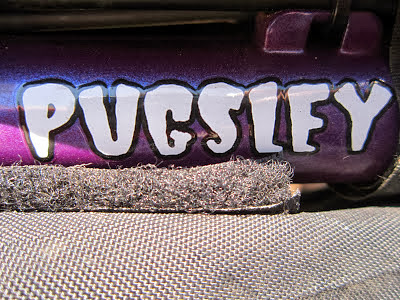 Life Changing?...
Can a bicycle change your life?,
I dunno but getting one of these has steered me in a direction that i have had no regrets.
I kind of wandered through life during my Thirties, Not having much luck with a few things like relationships, i was unhappy where i was living at the time, and was stuck in a rut at work - Groundhog Day!
I used to feel awkward when i was single and at social functions etc.. `where do i fit in here?` i used to think, being single in your thirties is not that nice, it seems fine in your forties though!
Yeah i was have a scream riding trail centres at the Tweed Vally but it was getting repetitive, same trails, same scenery, same conditions more or less.

Go your own way...
Then when i got my Pugsley i just did my own thing, and never looked back.
There was no Magazine articles on beach riding, what to set a bike up like, prepare it for sea water (remember they said you cannot!), tests on clothing etc...  and that i liked, something that was untapped, and un marketed - and it still isn't.
I just did my own thing and in time new friends have come along who see the coast here and what it has to offer, what ever the seasons the coast is ride able and changeable throughout the year.

Experimenting with bike parts has sometimes been quite expensive but i now know what can take the punishment of a salt water environment, and once prepped a bike can be ridden on the coast and it will last...
One man and his Pug... 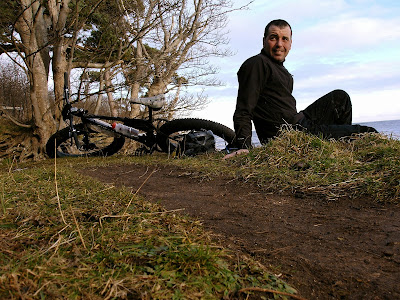 Starting a blog 4 months after getting my Pugsley it has kind of grown into something i did not expect.
Beach riding,  which is a loose collective name for coastal riding has brought me many memorable days out locally and farther afield. I have met some great friends, many online friends from all around the world who ride these bikes and also feel the same passion for them.
I have cycled places i would never expect and would imagine possible to be fun to cycle, seen some cool stuff and  blogging it have shared it with interested people... 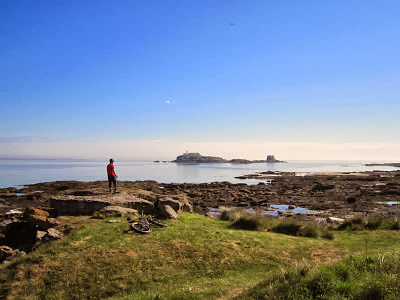 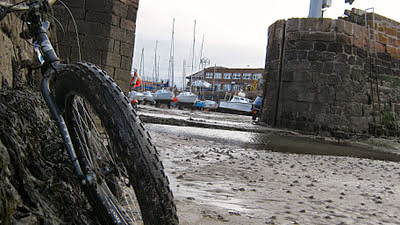 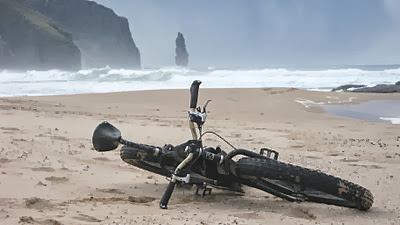 Loads of fun smiles per miles... 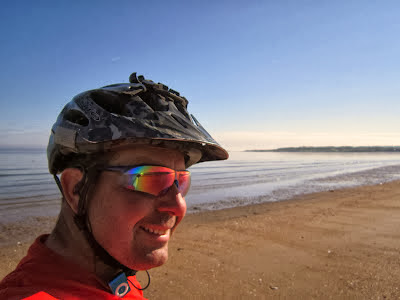 And i have met great people who have come along for the ride,
1st UK Fatbike Gathering; 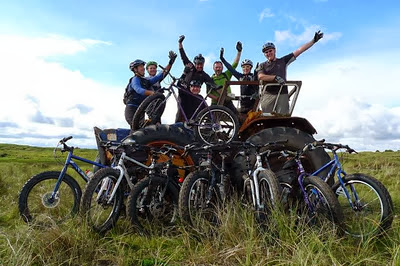 And there is a lot of people interested in the coast and cycling judging by the stats on here, never under 800 views daily, and often 1400 - 1600 views daily, and the stats show it is the local history and scenery posts that get the most views, stuff i visit using these bikes... -)
The WW2 XT Class Midget Submarine Wrecks i did has had the most views,
Here is a typical Fatbike ride to the Sub wrecks out in Aberlady Bay.

I have ridden over an estimated 10,000 miles now on my Pugsley(s), i keep a note of mileage using maps and previous bike trip meter stats of routes and loops (i don`t buy trip meters now as they just keep breaking)

Fatbikes have over the last 2 years really taken off with growing interest. But basically the fundamentals are still the same; big floatation tyres, loads of grip and fun to ride where a regular MTB struggles to the point of being a slog. Fatbikes are not replacements for MTB`s, for myself my Pugsley has opened up a whole new kind of cycling around where i live.
The biggest thing to evolve for fatbikes are the lighter rims machined out which increases the rolling, and the chunky tread Surly `Nate` tyres for wet riding conditions.

Getting fatter still...
Getting my Surly Moonlander moved the goal posts for beach riding, and where a bike can be ridden, the Moonlander`s bigger 100mm wide rims and 4.7" tyres increased float give unbelievable grip on loose pebbles, shingle, wet rocks, and really soft sand.

But the Pugsley is still my favourite bike, as it is so versatile. I was lucky to get my first grey frame back, and give it a new lease of life after i was given a pair of offset 29+ wheels from Tyler at Surly as a thank you.
So my 1st Pugsley has evolved into two pugsley`s!,  there breeding!


29+
Enter the Surly KramPug
I really like this concept and this bike is great to ride. Been a great summer weather wise, and made even better by this bike and how much fun it is to ride on trails around here... 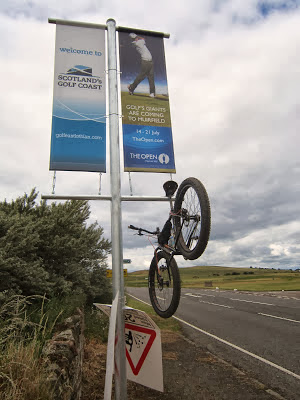 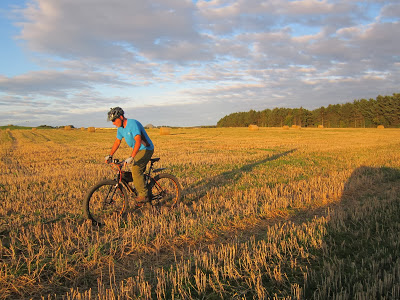 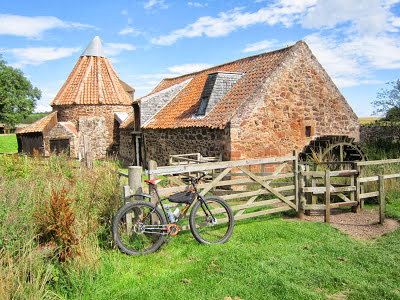 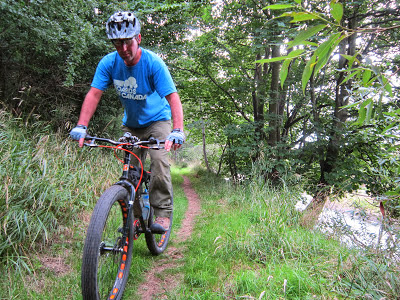 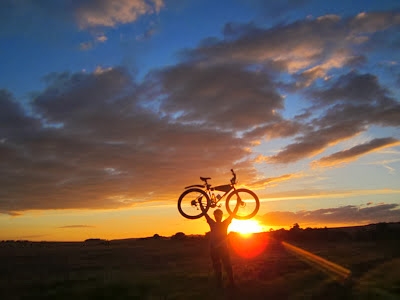 So whats next?
Plans are to build a `Super Pug` -)
I am still waiting to see if i can buy a new black Pugsley frame only, none in stock at present, and build the long planned `Jugsley` using the Jones Steel Truss fork,
Parts are gathering and nearly got everything. The Krampus wheels will be going on along with Surly Marge Lites, one bike with two sets of wheels,
This ability to take the 29+ wheels is a no brainer for me to stick with a Pugsley as my go to 4" fatbike.
Again the versatility of the Pugsley gives it another roll.

The grey frame which is black at present will be returned to grey and the bike will be built up as it was when i bought it, Along with  the Purple bike they will be kept and ridden now and then...a lot of happy memories on those bicycles...

Here to Stay...
They said it was a craze, the haterz hated, `you cannot ride in salt water` they said,  blah blah blah...
Aye you can! just a bit of Preparation first and it can be done.

Fat Trailbikes?...
UK manufacturers are trying their hardest to not market the new fat bikes as not just for sand and snow but good for regular UK trails. Of course everyone here in the UK has for the last 3+ years been riding their fatbikes on UK trails!, so we know that already!.
Surly never marketed the Pugsley as a sand and snow bike  from it`s launch, but a bicycle to take you where a regular bike would struggle,  this is the whole idea of a fatbike, they all are good fun to ride everywhere but not always a better or faster replacement to a regular MTB on some regular trails.


The Fatside is growing...
This years Forth Fat UK Fatbike Gathering seen the biggest group of fatbikes in Europe to date, 42!
That was quite a weekend, and the weather could not have been better to show off our coast to friends old and new who came from all over the UK, and two from the US, Tyler and Eric from Surly... -)

`Build it and they will come`  and they did, Fatbikes have arrived in the UK... -) 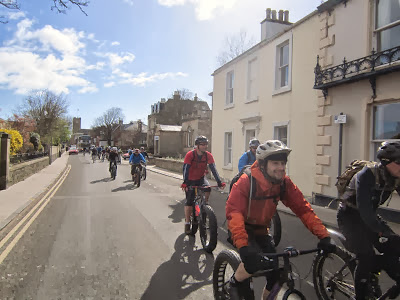 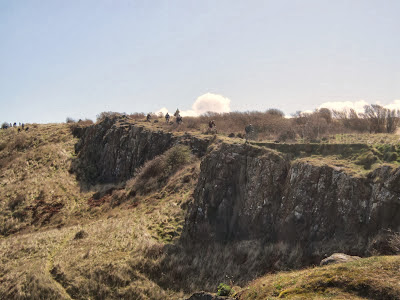 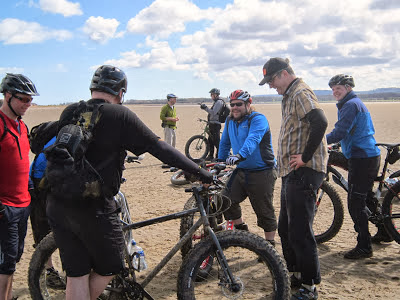 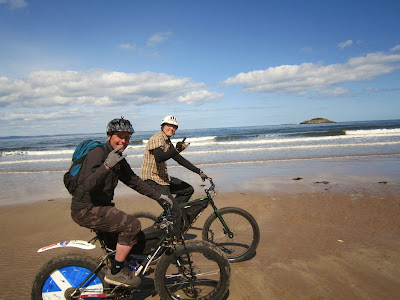 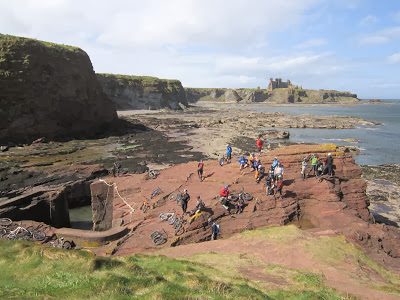 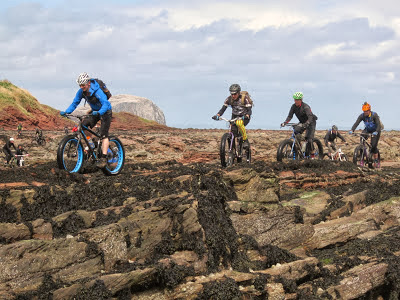 Heres to the next 5 years and where life leads us all -)
Posted by coastkid at 09:16